T:ANCS
Tanks: Art Nature Culture Seoul
From our interpretation of the competition brief, T:ANCS proposes to create a place in Seoul that is an extension of the urban fabric and is yet a place apart. Our intervention is to create a path, a “street”, that will literally and figuratively integrate the relics from a petroleum based industrial age with the digital bits fueling the information age. We will preserve as much as possible the form and nature of the existing tanks, re programming them to reactivate and make them relevant to the life and inhabitants of Seoul.
We propose to send the individual on a journey through space and time, a contemporary flaneur, spectator and discoverer; able to immerse themselves in the multiplicity of experience; from the introverted act of disengagement, reading, looking into a screen to extroverted thrill of experiencing nature and viewing the world from the heights of a balloon or a tower, the observer will also become the observed, the inversion that is the quintessential urban experience.

Our re-program of each of the five tanks will span time, the library as the depository of physical information represented by stacks of books, written word on paper, itself a product of an industrial process. The present is captured in the flow of gigabytes flickering in the glow of the LCD screen. Sites will be designed for exhibition spaces, performance/workshop, pod casting in multiple media, opening the possibility for a variety of medium and artistic expression, engagement from the intimate to large scale.

T:ANCS will also engage nature and its surrounds, preserving the connection to the many hiking paths leading to the site and modulating the landscape from the existing forest and flora to the more willful intervention represented by the landscaped greenery and water features.
T:ANCS presents itself to be experienced as isolated spatial moments or savored in its totality embodying the diversity and the contradictions of Seoul, the great metropolis. Site Planning
The site is located on the hill of Maebong-San, difficult to access from outside. Main access from neighboring roads continues to the temporary parking lot in front of the site. There are also trails leading towards and along the ridges of the hill from different access points in the neighborhood. The five tanks are buried in the deep soil protected by the concrete retaining wall around them. The location of the tanks within this context adds to the sense of discovery experienced by the visitor. Eight meter service road from the parking lot is the only access to the tanks branching out to the concrete stairs that goes up to the top of the tanks.

The effective circulation strategy for the tanks requires a recognizable entry point. The proposed visitor center forms the gateway to the Promenades in the center of the parking lot. A series of concrete retaining walls with a new hard surfaced access road leads to each tanks’ entrance which is sheltered with the concrete canopy on the mid level of the park. This will also guide the visitor to the Skywalk, bridge on top of the tank level. This clearly defined pathway in different levels will enable tanks to operate as a series of connected spaces within the landscape. 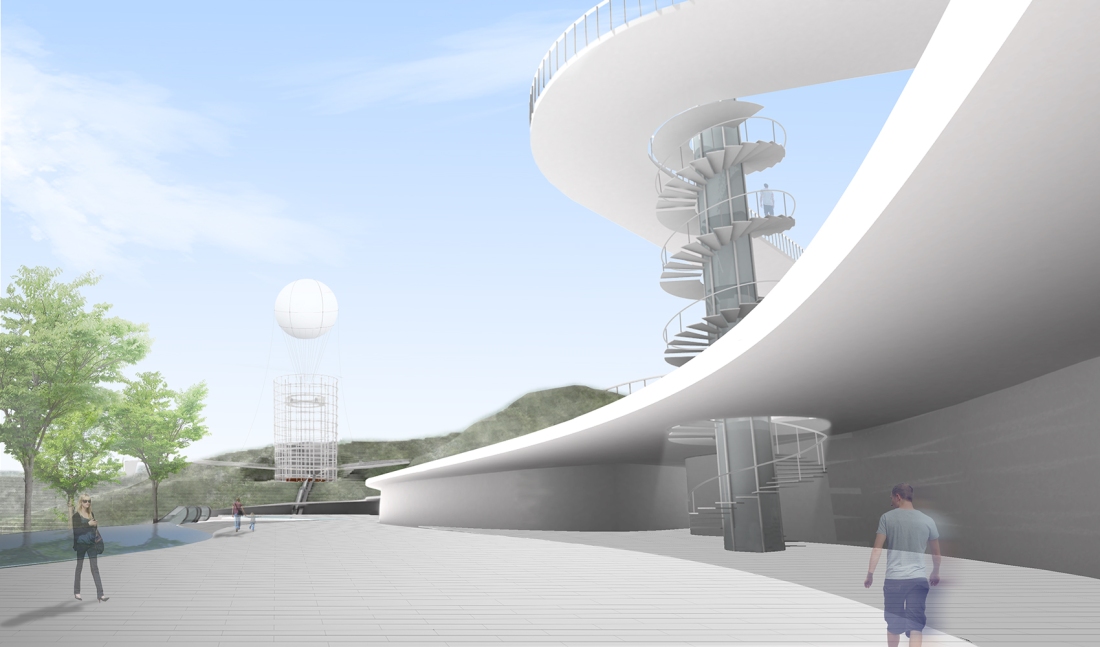 While the area around the tanks will be remained intact with existing topography and vegetation, island surrounded by access road loop is proposed as a designed landscape, the FrontGarden supplemented with newly planted vegetation. The collection of rain water will form water ponds in different levels around which have small passages equipped with stone benches. It is a quiet and comfortable garden with water element where people can relax under tree shadesin contrast with austere simplicity of proposed sky walk and the natural existing forest around the tank area.

The project is composed of two primary elements; the five Tanks which holds various cultural programs and the Promenade, an integrating device for connecting the different Tanks.
Promenade
It is neither a surface nor a building, instead it is a network for pedestrian navigation throughout the site that extends to connect to the existing mountain trails. An elevated street over existing forest together with redefined access road and their connecting circular ramps will enable tanks to operate as a series of connected spaces within the landscape.
The residual space between the retaining walls and the Tanks is about 3 meters, just enough to accommodate a new vertical passageway. We introduce it as an in-between space connecting the new elevated street, Skywalk and ground level.The proposal is to embrace interstitial spaces and create a variety of spatial experiences. 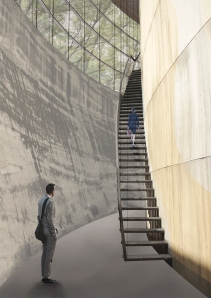 Tanks
The reprogrammed Tanks are the destination and the converging points for the Promenade. We propose to preserve the uniqueness of the existing tanks spatially and visually. The forest of rusted steel columns and rusted steel panels of surrounding walls represent their industrial heritage. Each tankwill have a single designated program with formal design of each program reverberating the tanks’circular form.
Tank 5 _ the Permanent Exhibition
Tank 4_Special Exhibition
Tank 3_ Performance Hall
Tank 2 _Library
Tank 1_Observation Tower/ Server Farm

Circulation Plan/ Barrier-Free Design
Starting from the parking lot, the lowest point of the site and the main entry way, the flow of people is directed through the landscape, rising up in to the entrance canopy above the access road. Each tank has its own direct connection from the access road on the same level though tunnels to reach each entrance.The existing service road is transformed into main access roadwith a new cast concrete pavement. The entire access road is pedestrianized except for drop-off, service and emergency vehicles’ access.
Every tank has vertical passage way up to the roof/Skywalk level. As one emerges above the tops of the tanks, the viewover the mountain forest opens up and the zigzagged route up to the observation platform, the summit of the observation tower on tethered balloon provides spectacular views out over the Han-river and the city. The Skywalk is connected to the existing trail at the west part of the site through which passers-by are invited to the new park complex.
Every part of the Skywalk and observation tower platform to ride the balloon is accessible by disabled with lifts or less than 1/12 sloped ramps. The Performance Hall, the only building that has 3 levels is equipped with disable lift inside from ground level. 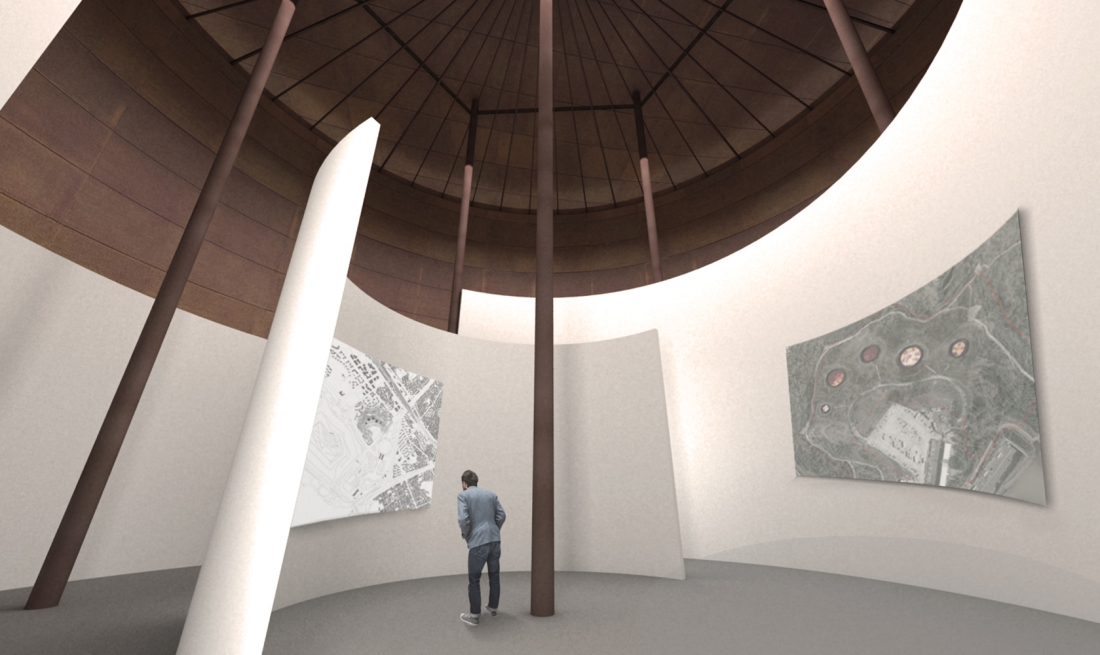 Tank 5 is planned as the Permanent Exhibition which functions as reception area for the five tanks’ program. The Permanent Exhibition shows history of the site, rehabilitation of industrial heritage and the ecological preservation of the park complex.Layers of circular walls on two levels with different radius provide sufficient surface area for exhibition. The original tank structure is preserved and treated as independent structure with added new columnsaround the tank to support the spiral ramps and the roof slab that contains water to form a reflecting pond.

Tank 4 functions as Special Exhibition space,retaining its original structureexcept for structural addition/re-enforcement to support access ramp to sky bridge andinstallationof art works,partitions, projection screens and equipment. There is also provisions for a bar facility. We propose to exhibit mainly media arts and commissioned installation art projects. We will maintain the dramatic rusted steel interior space with a height of 15 meter.

Tank 3 is planned as the Performance Hall. The small but highly flexible auditorium is designed as a 300 seat venue for performances and events. The Existing columns have been replaced withnew ones at the outer perimeter of the seating area to create a clear space for a stage area.
In order to provide for sufficient back of house functions (dressing rooms, storage, technical rooms and rear stage space) and provide space at stage level for audience amenities (concession bar, box office and sufficient toilets), the theatre has been provided with a sub-stage level. This sub stage level accommodates the required program with good adjacency to the stage via stairs, passenger lift and allows for a two level stage elevator / lift in the center of the space. This has artistic and practical / operational benefits for the theatre space.The elevator is a double decker lift which allows entrances to be made from below without opening up a void in the stage (the lift will rise up) allow further flexibility for a higher/double level stage or even two playing levels for performance. Built into the upper level of the lift is a ring and disc motorized turntable, allowing for independent or unified movement in the same direction or opposite direction to provide an additional element of performance. The seating is envisioned as partially retractable to create a seated or flat floor mode which will allow more flexibility in staging or seating arrangements. The upper sections of seating remain fixed. 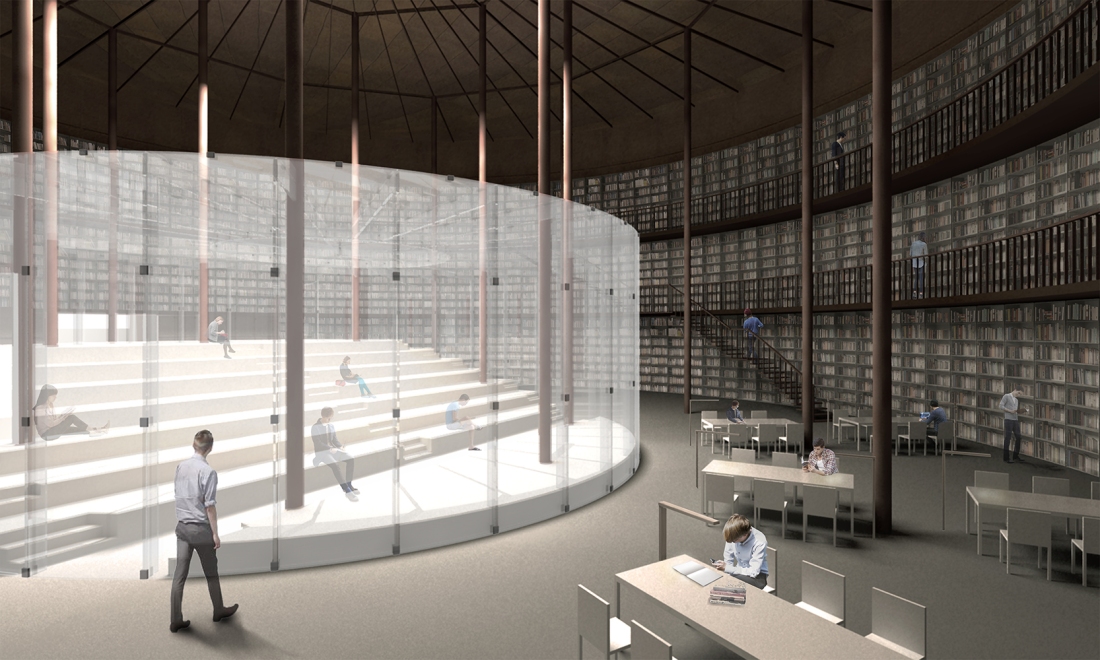 Tank 2 is planned as the Library with multi-purpose auditorium where various books, data and information is available.It was clear to us that since the advent of the internet, prevalent personal computers and mobile devices that there has been a distinct shift in how people approach information. Traditional libraries have ceased to be the only site where people are able to source information or knowledge. The library in Tank 2 offers digital library seamlessly integrated in the traditional library with books. Supported by the server farm and its network connection to other libraries’ digital information in Tank 1, people will be able to access extensive digital information and e-books.
In the center of the Tank 2, a round form of glass auditorium capable to house 160 people is designed to respond to the cylindrical space within the tank. Under which information desk, service spaces are located. The library office and café are also partitioned for privacy. All of the partitions separating them from the main library space for privacy are light and transparent sealed envelope with structural glass to respect the integrity of the existing structure of the tank and the architectural experience of its spatial quality. 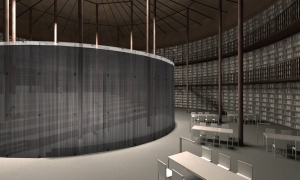 Tank 1 accommodates server farms to support the Tank 2_Library’s digital information, network system to link other library, and media arts archives and extended Promenades to the observation point, via tethered heliumballoon.Tank 1 symbolizes the project’s main premise, to replace the petroleum-based fuel of the industrial age with creative energy and digital information, the driving force in the digital age with a vision for new identity of Seoul city as a creative power station. It marks the highest point of the complex, providing uninterrupted views over the T:ANCScomplex, Han-river and the city.
Filled with 6,000 cubic meters of helium, it allows visitors to rise above the complex. It is 32 meters high and has a diameter of 22 meters. It is attached to the ground with a cable, controlled by an hydroelectric winch. It can rise to the top end of the steel frame (61 meter high from the parking lot, altitude of 77 meters) and its gondola has a carrying capacity of 30 passengers. Its internal illumination system changes the envelope’s color in real time, according to the ambient air pollution in Seoul.

The Roofscape
The round roof of each tank is designed as focal point of Promenade experience. These can enrich the walking experience on the Promenade and provide orientation.
-The reflecting pond on top of Tank 5
– Existing camouflage roof of Tank 4
-Green Amphitheater on top of Tank 3
-Wooden deck Roof Terrace of Tank 2
-Tethered Observation Balloon at Tank 1 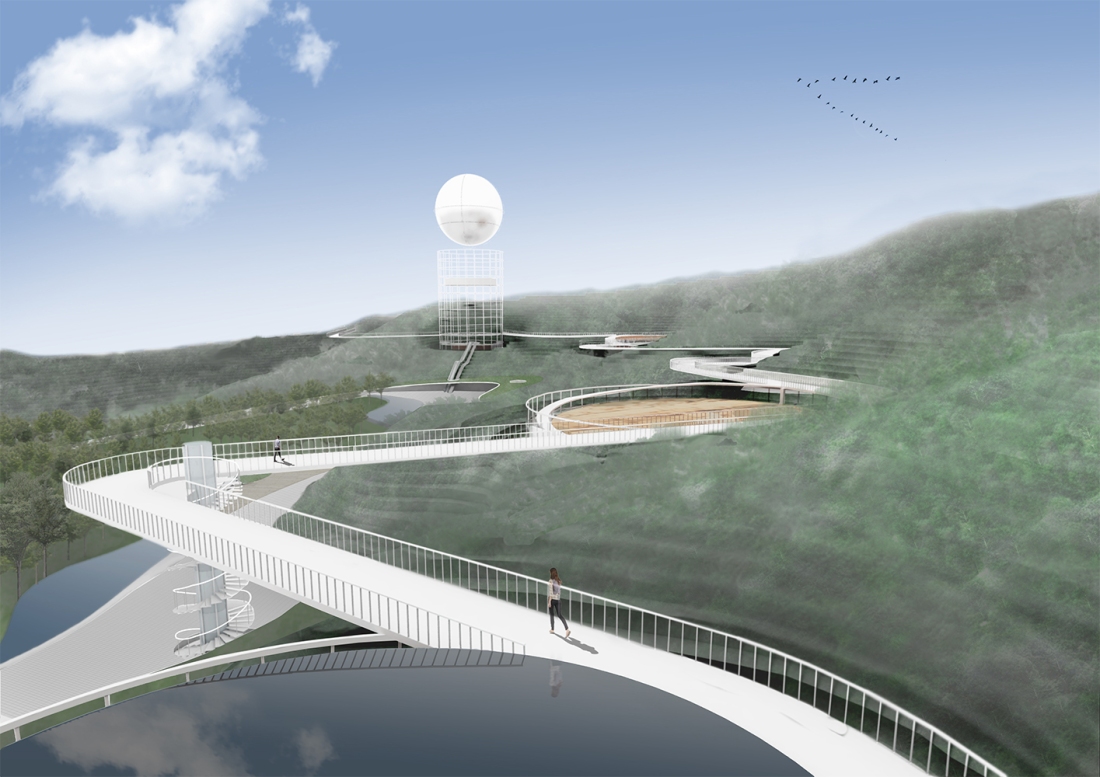 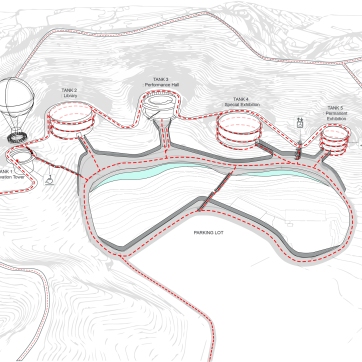 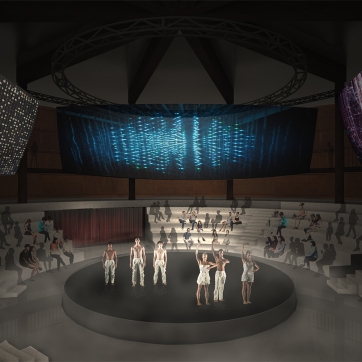 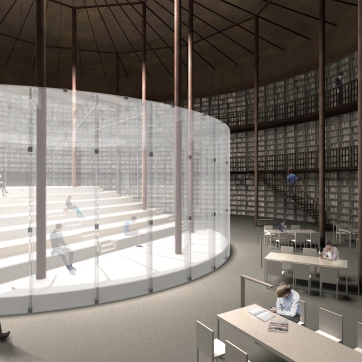 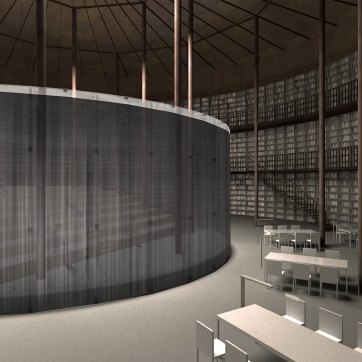 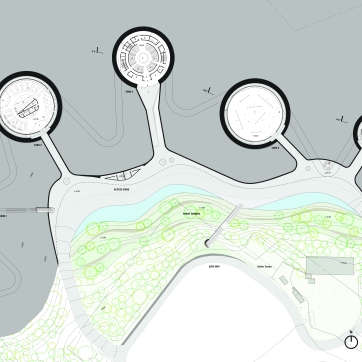 View all posts by PLAN_C